One of the ways that the N Gauge Society celebrated its 50th anniversary was to team up with Peco to produce a selection of exclusive wagons from their well-established range.

The 50th anniversary marked a significant milestone for the Society and for N Gauge itself. Few can deny that without the product support from Peco over most of that time, N Gauge (and the Society) would not be where it is today. Peco’s founder Sydney Pritchard was member number 2 of the Society.

The Society made a varied selection of interesting wagons to hopefully cater for most members. While they were all equally appealing, pride of place perhaps went to the 7 plank coal wagon for G Simmons, as the eagle-eyed will note that it is number 50. The prototype was a GER registered 1909 built 7 plank wagon without end-doors, exactly as per the Peco wagon.

The  15ft wheelbase tanker was more appropriate to modern times, and the livery was no less interesting. The Shell Oils (lubricating oils) wagon was built in 1966 with later conversion to air-brakes and Bruninghaus suspension. The red/yellow kinked line used by Shell was introduced in the late 1980s and the wagon correctly carries the BR Petroleum Sub-Sector symbol. 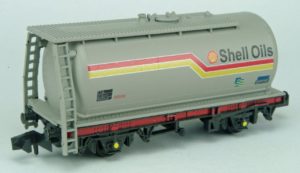 The Society produced 250 of each wagon, and although exclusive to the Society, these are not limited-edition wagons. If they prove to be popular with members then more can be ordered.