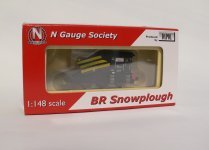 Our Ready-To-Run BR Independent Snowplough was released at the 2010 Warley National Model Railway show at the NEC.

The variants originally available were:

In the 1970s some Snowploughs received the corporate image BR Blue colours. This example – ADB 965240 – was based on the western region and carried these colours into the early 1990s – though by then orange cantrail stripes had been added. (Eras 6, 7, 8)

ADB 965208 when based at Inverness depot was embellished with “Highland Rail” stag vinyls, and characteristic grey plough face, as depicted on this model. (Era 8)

Although some Snowploughs received blue during the corporate era, many remained in black. This version represents ADB 965196 as photographed in the late 70s and early 80s. (Eras 7, 8)

In the 1980s sectorisation era, Tinsley depot turned out Snowploughs ADB 965308 and ADB 965309 in the attractive colours of Trainload freight with Distribution squadron repeater markings, and named “Snow King” and “Snow Queen”. Our model depicts ADB 965308 “Snow King.” In later years this version was given a cast metal Tinsley depot plaque; though we have omitted it for greater flexibility.

Privatisation saw the fleet of snowploughs (by now coded ZZA under TOPS) inherited by Railtrack. They refurbished and repainted each one and fitted a curved icicle breaker to the roof. This is included in the packaging for the modeller to fit. To enable two of these models to represent two different vehicles when prototypically placed back to back on the layout, this model will be numbered ADB965210 on one side and ADB965236 on the other, though the liveries are identical on both sides.

The final model in our initial production run brings the snowploughs right up to date in the contemporary colours of Network Rail – identical to those of NGK42-007 bar the Network Rail decal that obscures the former Railtrack branding. As above, and in response to the membership, this model will be numbered ADB965232 on one side and ADB965243 on the other.

An additional livery ordered from the supplier since the original launch.

An additional livery ordered from the supplier since the original launch.

We use cookies to ensure that we give you the best experience on our website. If you continue to use this site we will assume that you are happy with it.Ok